Fried dough + honey syrup = who wouldn’t like that! Loukoumades are my favorite! They are the Greek version of a doughnut in honey syrup.

Loukoumades are fried to a nice golden crisp on the outside but they’re still soft and chewy on the inside. They’re drenched in a honey syrup and then dusted with cinnamon. I’ll wait while you get a paper towel to wipe the drool….

Just like everything else I make, they’re simple to make at home, and definitely a crowd-pleaser. Plus, they’re very economical to make, so I highly recommend that you make these for your next gathering. You can watch me making them on my video.

Let’s go over the ingredients:

Can you believe that’s all it takes to make delicious doughnuts in honey syrup? They’re so delicious and inexpensive to make.

Can I make a small batch or make them ahead?

Unfortunately, this isn’t something you want to make ahead of time. However, you can make the syrup ahead of time since it needs to be room temperature to roll the doughnuts in, and you can make the dough the morning of your gathering. After it has risen for an hour, just cover it with plastic wrap and put it in the refrigerator. Pull it out of the refrigerator 30 minutes before you’re ready to make the doughnuts so your dough isn’t super cold when you fry it.

If you want to make a smaller batch or aren’t making them for a crowd, you can just cut the recipe in half. They are addictive, so watch out!

Have you tried Greek honey?

It’s my favorite type of honey and if you can get it, I highly recommend it. It’s very aromatic and has herbal notes from Greece’s fields of thyme, oregano, and sage. If you can’t get it, try local honey.

Tips for the yeast

Similar to making bread, you’ll start by dissolving the yeast in ½ cup of lukewarm water with sugar. Make sure it’s not too hot so it doesn’t kill the yeast, and not too cold so it doesn’t take forever to activate the yeast.  You want to make sure the yeast activates though, so set it aside for about 10-15 minutes until the mixture gets foamy. If it doesn’t foam, start again with new yeast. It’s important for the yeast to be active when making the doughnuts.

Salt is a big yeast killer. Never put salt directly into your yeast water. The trick is to stir your salt into your flour. It will be dispersed enough to not affect your yeast.

Want to save an extra step? Because you need lukewarm water and lukewarm milk to add to your yeast water, I measure my milk into a large measuring cup, then add hot water to it. There you go… lukewarm milk and water.

For the oil, I like to use canola oil when frying, and I try to get organic to stay away from GMO’s. To know when it’s ready to fry your doughnuts, the temperature should be between 350˚-375˚F. You can stick a wooden skewer straight down into the oil. If bubbles start rising up very quickly, it’s ready!

When you’re ready to start frying, a great tool to have is an ice cream scooper. It will make things super simple. Put it down in a glass of water between scoops to help the dough release from the scoop. If you don’t have a scooper, just use a couple of tablespoons.

When you put your scoops in the pan, try not to overcrowd the pan. You want to leave enough room to allow them to be flipped and move around a little bit. Also, be sure to have a tray lined with paper towels ready for your doughnuts. Any excess oil will drain off of your doughnuts before you dip them into the syrup.

After you roll your doughnuts in the honey syrup, I like to sprinkle them with cinnamon. Honestly, the more the better, but a lot of people like to sprinkle ground walnuts or powdered sugar on their loukoumades.

They are so light, airy, and delicious! I love the syrup and cinnamon combination, and they’re even better than the ones you get at the festivals.

If you like these, also try the apple version, my Diples (greek honey turnover fried pastries), and my Almond Palmiers (elephant ear pastries). 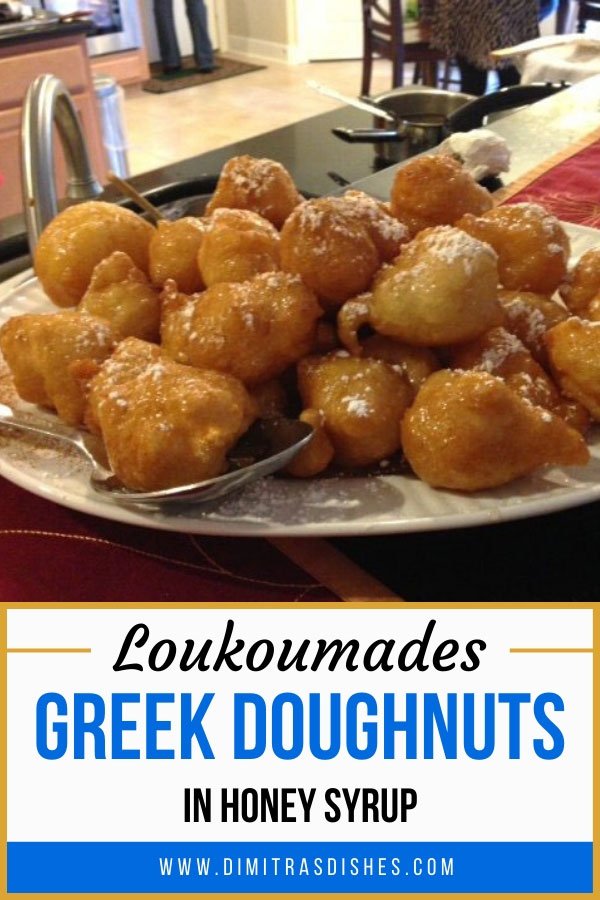 Hey! It is nice to meet you!

Hello and welcome to my cooking adventure! My Greek heritage has filled my heart with a deep love of cooking and sharing those home-cooked dishes with friends and family makes my heart sing. Here, on Dimitra’s Dishes you will find easy to follow recipes together with step-by-step video tutorials filled with tips and tricks to help you create delicious food for your loved ones.​ Let’s cook, share, & create beautiful memories!

This error message is only visible to WordPress admins

Please go to the Instagram Feed settings page to create a feed.

We use cookies to help deliver a better website browsing experience. By continuing to view our site, you consent to the use of cookies on our site. Read MoreACCEPT

This website uses cookies to improve your experience while you navigate through the website. Out of these cookies, the cookies that are categorized as necessary are stored on your browser as they are essential for the working of basic functionalities of the website. We also use third-party cookies that help us analyze and understand how you use this website. These cookies will be stored in your browser only with your consent. You also have the option to opt-out of these cookies. But opting out of some of these cookies may have an effect on your browsing experience.
Necessary Always Enabled
Necessary cookies are absolutely essential for the website to function properly. This category only includes cookies that ensures basic functionalities and security features of the website. These cookies do not store any personal information.
Non-necessary
Any cookies that may not be particularly necessary for the website to function and is used specifically to collect user personal data via analytics, ads, other embedded contents are termed as non-necessary cookies. It is mandatory to procure user consent prior to running these cookies on your website.
SAVE & ACCEPT
Skip to Recipe